Riot Games is back with another massive patch update, bringing some new champions, changes, buffs and nerfs into the game. One of the major updates in the game is, you can choose your own lane while queuing up with position preference.

Welcome, all players in the Americas to the Open Beta!

Also, welcome to players in Hong Kong and Macau! Outside the Great City of Demacia, the stone colossus Galio keeps vigilant watch. Built as a bulwark against enemy mages, he often stands motionless for decades until the presence of powerful magic stirs him to life. Once activated, Galio makes the most of his time, savouring the thrill of a fight and the rare honor of defending his countrymen. But his triumphs are always bittersweet, for the magic he destroys is also his source of reanimation, and each victory leaves him dormant once again.

Patch 2.2 begins the testing of a new feature they’re calling Position Preference. Similar to League PC’s position select, they’ve been working on a way for you to have more control over the position you play in-game.

Note: This test will not be running in the Americas. 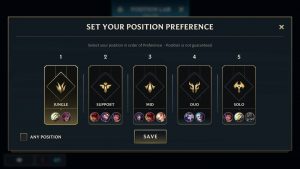 Before you get into a match, order your preferred positions (solo lane, jungle, mid lane, duo lane, support) from most to least preferred, and the matchmaking system will prioritize giving you one of your top positions a majority of the time. It’s still possible to be given any position, but you should have a lot more control over how often you are assigned one you want to play. If you choose not to specify a position, no problem: they’ll look back at your recent history and base it off that instead. Your choices will even be saved between sessions!

Once champ selection begins, all players will be assigned a position—you’ll see them in champ select—and champs that are regularly played in your assigned position will be highlighted. You can also now filter by position to find appropriate champs for where you’re playing. Finally, when the game begins, you’ll see new indicators to guide you to your chosen lane.

They’ll begin with a temporary Position Preference queue, enabled for 2 weeks. You’ll find it in the ranked tab, but there are a few things to note:

[IN TESTING] ALL RANDOM ALL MID (ARAM)

A player-favourite mode from League PC hits its first round of testing in Wild Rift this patch: All Random All Mid is here! ARAM will be available to try out for a limited time. Queue up and immediately enter hectic team fights with speedier levelling in 12-minute all-out brawls. In ARAM, you’ll play on the Howling Abyss, a bridge atop a bottomless crevasse where warriors once fought to defend the rest of the Freljord from an ancient enemy. In ARAM, there’s one lane, and you’re given a random champ from your pool. If you’re not happy with the hand that Lady Luck has dealt, use a limited number of rerolls to try again. Rerolled champions go to the “bench” where your teammates can pick them up if they wish.

Starting April 5th, they’ll be running a small three-day test of the game mode to make sure that everything works as intended. If things look good, ARAM will be available to play for over a month, running from April 15th to May 19th.

We’re still early, so at this stage in development, some features are not fully supported. Runes, items, loadouts, and a few other areas have not been finalized yet for Wild Rift.

Wild Rift’s first ranked season is coming to a close, but don’t worry—the fires of competition will burn fiercely once more! Season 2 begins April 2 at 18:00 UTC!

Reaching Gold with 10 wins or more under your belt grants Glorious Jinx, plus Jinx if you don’t own her already.

Glorious Jinx was awarded to players who reached Gold or higher in Season 2. Emerging unscathed from a thousand apocalyptic explosions, she’s got her eyes on the big boom to end them all.

Later in this patch, you’ll also receive an emblem showcasing your highest rank in Season 1, and an icon if you played any ranked games during Season 1.

Patch 2.2 introduces the Wild Pass, a way to earn more content just for playing. You can choose to upgrade your Wild Pass to obtain some new rewards, and reaching the end of the pass (Level 50) grants you an exclusive skin: Hexplorer Jax! Beyond Level 50, you can continue to earn bonus rewards as well.

A master of Hexploration, Jax travels light so he can load up his pack with “artifacts” from “ancient cities.” Yet, nobody has ever heard of these civilizations before, and some of the technology he brings back seems curiously advanced…

More info on the Wild Pass will be coming in the next few days.

We’re testing 120Hz support for a select few high-end devices. Your device may experience overheating or performance issues, so use carefully!

More information in the Controls and Settings section below.

There are known issues with some text displaying incorrectly in Arabic—we’ll be fixing them in future patches.

Several new in-game items are on the way, including Winged Moonplate, Force of Nature, and Frozen Heart. Read more in the Items section below, and check out more details on the whys and hows in our recent /dev update.

You can earn or purchase goodies from a bunch of different sources. Please check the page in game for more information on how to get ‘em!

All goodies will be released throughout the patch.

Wild Rift Journey starts when you complete the event for new players, Wild Rift Academy. Complete the Journey to earn content that will prepare you for games ahead!

Each day, pick up some bonus Blue Motes for helping us test our Position Preference queue.

This cow’s too beefy.

Amumu’s tiptoeing over the line for our win rate tolerance, so we’re chipping away at a few of his core stats.

(Ult) Curse of the Sad Mummy

Cleaning up Corki’s kit by removing an unintuitive mechanic where Corki automatically converted physical vamp to magic vamp when auto-attacking.

“Sometimes, it takes a tactical genius to break a fortress. Sometimes, you just have to hit it harder.”

Tuning down some of Jhin’s PvE power to keep him from lane bullying through tempo as opposed to finding good trades with his champ opponents.

Bringing the Aspect of War back in line with his League PC counterpart.

Teemo is in a pretty healthy spot in high-level play, but overperforming at lower ranks. Reducing his snap escape potential, which we think is relied on more by players who need to use it to recover from being out of position.

We’re rolling out a big round of item updates, aimed primarily at tanks, to help flesh out the item roster and more closely match the icons to those on League PC.

Force of Nature will be replacing Adaptive Helm as the go-to Magic Resist item for when those pesky mages won’t leave you alone.

Use Frozen Heart’s aura to reduce nearby enemies’ Attack Speed and defend your team.

Sapphire Crystal is now the go-to for heavy mana users; it’s inheriting the Mana Charge passive so you can start stacking up your Tear of the Goddess earlier.

TEAR OF THE GODDESS

Winter’s Approach and Fimbulwinter are being reworked to become the Health/Mana/Ability Haste item. CC machines, start your engines!

As above, with a new build path, Dead Man’s Plate is the go-to tank item for speedy engagements.

We felt applying Grevious Wounds was too far out of the tank’s control after having purchased Thornmail, so this should give more ways to apply the debuff when they need it most.

Like a beautiful butterfly, Sunfire Cape is evolving into Sunfire Aegis. There are a few notable differences between the PC and Wild Rift versions though. Wild Rift’s version isn’t a mythic item and thus doesn’t have a mythic passive. It also loses out on a lot of tank stats as this version only has Health and Ability Haste. Sunfire Aegis is your go-to tank item if you want a bit of extra damage.

Adaptive Helm wasn’t hitting the mark, and its ideal use case wasn’t always clear, so we’re replacing it with Force of Nature.

We’re changing the way champions play with higher attack speed. Previously, champs who stack a bunch of attack speed items have less attack frame reduction, which makes kiting and chasing a bit too reliable. We expect marksmen to feel the highest impact here, so we’ll be monitoring this adjustment closely.

Ghost has seen little use, so we’re adjusting it to be similar to League PC’s version. Getting a takedown (kill or assist) refreshes its effect, a bit like Jinx’s Get Excited!

Scaling back Ignite’s cast range so that killing people with it requires a bit more forethought, and opponents feel like they actually had a chance to do something before catching fire.