Valorant Champions Skin Bundle Generated $18.7 million in Sales: The Valorant Champions weapon skins collection was added to the game to allow fans to support their favorite Valorant teams while also purchasing some beautiful weapon skins for themselves in the competitive shooter. The Champions bundle, which costs 6260 Valorant Points (about $70), includes two weapon skins for the Vandal and Melee, as well as a slew of player cards and a gun buddy. The weapons in the package each feature a unique finisher and a light that activates only when the wielder is top fragging on the whole server. Riot Games has reported that Valorant has now generated over $18.7 million in sales from the Champions skins package. VCT Champions 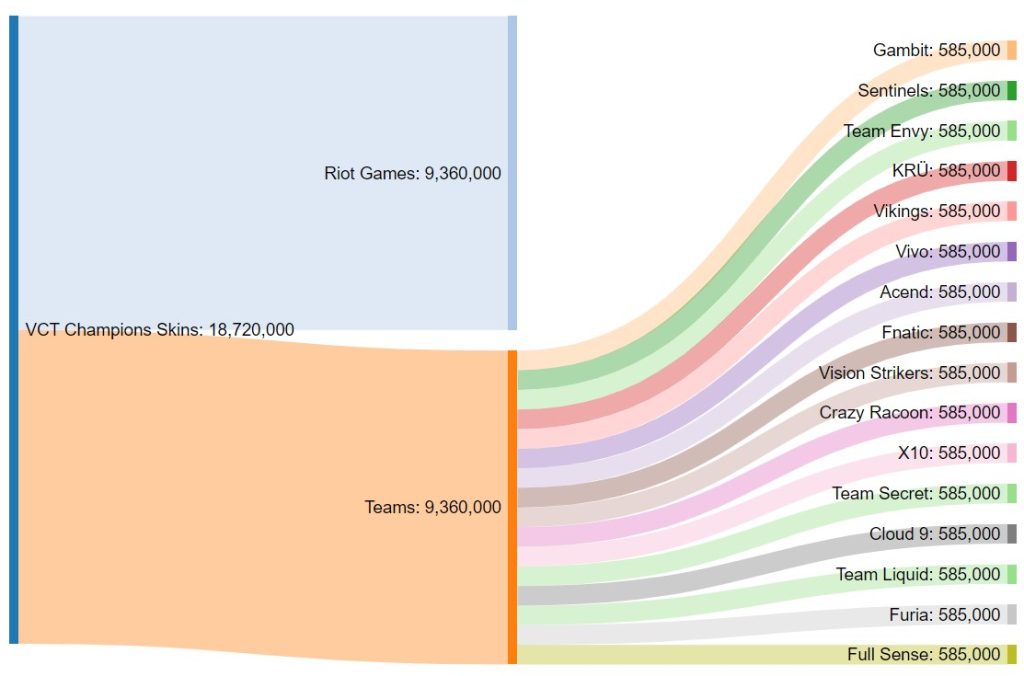 Riot’s Champions Collection, unveiled Nov. 23 before of the VALORANT Champions Tour’s conclusion, granted a 50 percent income split to teams who participated in Champions, according to sources. According to reports, the $9.36 million in money from the VCT Champions skins was distributed evenly among the 16 teams. Two of the 11 teams with proven VALORANT Champions skin income splits provided the majority of the money to their players, while the remaining seven teams kept the majority of the Champions bundle money for the organization. There were two 50/50 splits and one team, X10, chose not to divide any money at all.

Because esports has a history of keeping contracts under lock and key, particularly the financial settlements of each deal, each organization frequently changes the portion of the pie that players may receive. Upcomer’s research outlined purported ways in which orgs and their players shared the crowdfunding funds, which astonished several fans. According to the research, the most generous teams were Vivo Keyd (who gave players 80 percent of the cash – over 93,000 each player), Cloud9 (75 percent), and Furia (75 percent) (60 percent ). Sentinels and Team Envy, now OpTic Gaming, divided their award equally, whilst Fnatic, Team Liquid, and Vision Strikers offered the players a minority share of 20-30%.

Read More: Valorant Agent 20 Might be an Initiator and He is Blackmailing Valorant Protocol