VCT 2021 Champions: Group draw and schedule are now out for VALORANT Champions 2021

VCT 2021 Champions: Group draw and schedule are now out for VALORANT Champions 2021. The first-ever VALORANT Champions will be held soon. This December, the biggest VALORANT tournament of the year will be held in Berlin, Germany, with 16 of the top teams from across the world competing for the championship title and prize money. This will be the final event of the VCT season in 2021, and it is the event that all teams have been preparing for all year.

Check out the Draw Show and see where your team landed 👇 pic.twitter.com/DzgD2P54iN

According to Riot Games, the groups were formed based on “a combination of their respective final rankings at Challenger tournaments and the strength of their region.” Riot also wanted to make sure that teams weren’t pitted against teams from their home region. All four EMEA teams have been placed in separate groups, as have the three teams from North America, Southeast Asia, and Brazil.

Here are the groups at VCT Champions:

The format is identical to the one used at VALORANT Masters Berlin. The groups will be double-elimination rounds, with teams progressing to an eight-team single-elimination playoff based on seeding. Only teams from the same group must be on opposing sides of the bracket.

The format for the Champions will be the same as for the VCT Masters Three Berlin. Four groups of four teams will participate in a double-elimination group stage modeled after the GSL, with two teams from each group advancing to the single-elimination playoff bracket.

A complete schedule has been published: 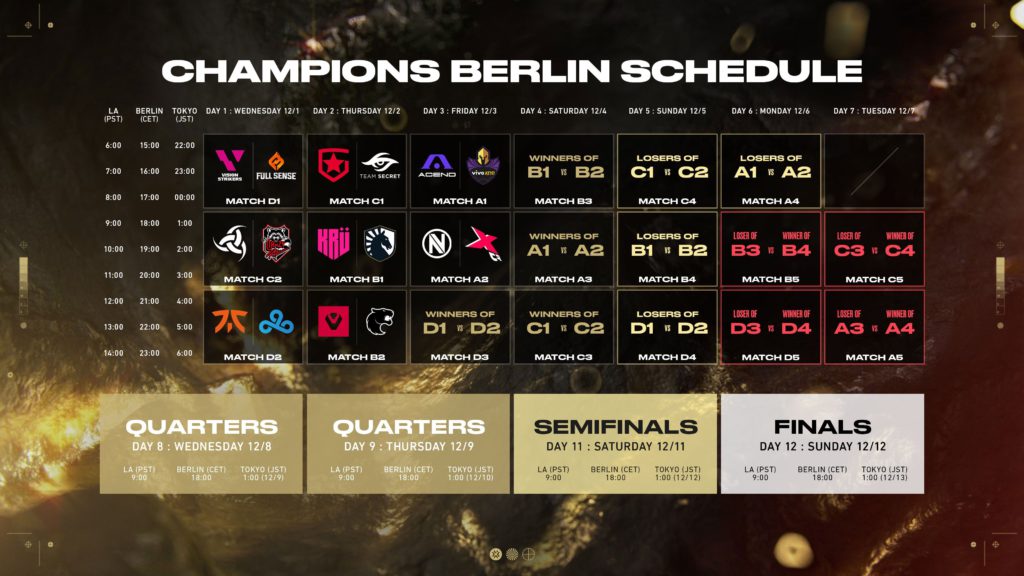 VCT 2021 Champions: Group draw and schedule are now out for VALORANT Champions 2021

Following the conclusion of the group stage, a random draw will seed all eight playoff teams. In the first round, a first-place group team will face a second-place team from another group. Except for the best-of-five grand finals on Sunday, Dec. 12, all matches will be best-of-three.