Welcome back to another guide of League of Legends: Wild Rift where we will discuss the various types of the monster in the game. This guide will be helpful for all the junglers of the team. As they need to level up by clearing out maximum monsters of the jungle. After the completion of mid-game other champions of the team could also kill the monster to level up. The raptors are bird like creatures on the bottom right side of the map above the Red Brambleback or Red Buff. They are a total of four raptors out of which one is Crimson Raptor and three baby raptor. Crimson has 1520 HP whereas baby raptors have 585 HP at the start of the match. Killing all the raptors gives the champion a total of 160 gold. The Gromp is the frog-like creature just beside the Blue Sentinel on the bottom left side of the map. It has a 2500 HP at the start of the match which gets increased further in the mid and end of the game. Killing gromp gives 140 gold to the champion. The Krugs are the stone monsters below the Red Brambleback in the bottom left of the map. The krugs are split into smaller versions when killed by the champion. Basically, there are three types of krugs – Greater Krugs, Krugs, and Smaller krugs. In the initial phase of the map, one Greater Krug and Krug gets spawned. The Greater Krug splits into two smaller Krugs on its death. The Greater Krug has 172 HP. The champions get a total of 200 gold on killing all the Krugs. Murk wolves are a species of wolves found near the wild rift Blue Buff. They are a pack of 3 Wolves consisting 1 Greater Murk Wolf and 2 Murk Wolves. The Greater Murk Wolf has 1830 HP in the initial phase of the game. Killing it gives a total of 140 gold. The scuttler is a small crab that roams around in the river area on both sides of the map. This monster doesn’t fight back to the attacking champion. In the initial phase of the match, it has 1850 HP and gives 120 Gold on killing it. Scuttler is one of the most important monsters of the game. It provides vision at the two most important location, i.e. Elemental Dragon and Rift Herald/Baron. 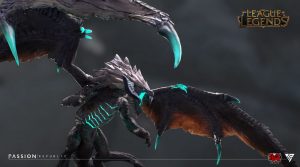 Elemental Dragons are found in the bottom side of the map for a non mirrored team. There are five types of dragons in the game.

The first four dragons are the part of elemental dragons followed by the Elder Drake. Elder Drake is the most powerful dragon among all others. Multiple champions are needed to kill it.

Rift Herald is a powerful neutral monster that spawns in the Baron Pit. Slaying the Rift Herald drops the Eye of the Herald at the entrance of the pit, which grants Empowered Recall and the ability to summon the Rift Herald to push a lane. Rift Herald spawns 6 mins after start of the game. It is used to push the lane and destroy the enemy turrets. Baron Nashor is the most powerful monster on the Summoner’s Rift in Wild Rift. Killing Baron Nashor grants Hand of Baron to all living teammates for a specific time. This particular buff gives bonus attack damage, bonus ability power, Empowered Recall and an aura that greatly increases the power of nearby minions.

While fighting with the Baron Nasher, it attacks the champion closest to him. Baron Nashor is a high points monster. As a result, it needs all the champions to defeat him. A tank is must to initiate a fight against Baron to take the damage of the monster. While fighting with Baron, the team is most vulnerable from enemy attacks. Therefore, the best time to attack the monster is when all the enemy champions are executed.