Twitch, a video live streaming service operated by Twitch Interactive, a subsidiary of Amazon.com, Inc is the most viewed platform for years. The service mainly allows various gamers and pro players to stream their favourite games and connect with the audience. Though we are always interested to know the most popular twitch streamers. Esports Charts on its recent blog revealed the top 10 Most Popular Female streamers in Q3 of 2020. Let’s take a look into the list of leading female streamers around the globe. The twitch streamer from Spain Elizabeth “Staryuuki” got placed on the 10th place in the top 10. She is popular among her fans to “just chat” at the broadcasts and loves to dance. She also is #1 in Just Dance category on the platform.

Staryuuki is the #1 Spanish female streamer and her Hours Watched concluded 1.5M for 400 hours of Air Time in Q3 of 2020. 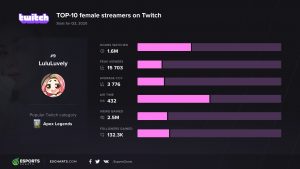 The content creator for NRG Esports Lindsey plays Apex Legends for fun. Since the last year, LuluLuvely has achieved some amazing stats as she climbed 12 positions up in rating. She increased her Hours Watched by 460% and Peak Viewers by 288%. 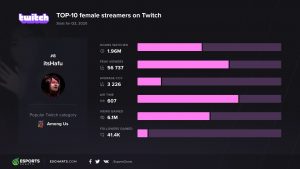 A Twitch streamer from the United States Rumay Wang is famous for her nomination for Twitch Streamer of the Year by Shorty Awards and competed for the title of “Gaming Legend” on the show by Smasher.

itsHafu holds #8 position in the list and focused more on Among us for the Q3 in 2020. Moreover, Hafu is known for raising the theme of women’s harassment in the streaming and gaming industries and thus drew attention to the problem. 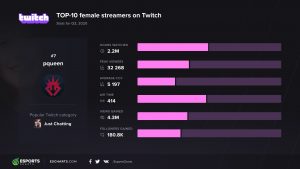 The Turkish female streamer Pelin “Pqueen” Baynazoğlu is popular in the Just Chatting Twitch category. Pqueen got around 2.2M watch hours for Q3 in 2020. She is among the most famous streamer in her region. 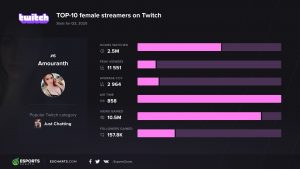 Kaitlyn “Amouranth” Siragusa is a famous twitch streamer and professional cosplayer who managed to personify the characters such as Lara Croft, Harley Quinn, and Wonder Woman. Though her cosplays are very famous among her fans but it does not comply with the Twitch policies. As a result of this, she has been banned twice. Just Chatting is the most popular Twitch category of Amouranth. The Botez sisters placed #5 in the list. Alexandra and Andrea Botez plays competitive chess and represented Canada at many chess championships. In Q3 of 2020, they’ve achieved 2,7M Hours Watched because they dedicated a lot of their time to “Just Chatting” category – 1,9M HW. If we compare their stats with Q3 of 2019, we can say that girls made a breakthrough by rising from 39 to 5 places on the list. The League of Legends Twitch streamer ranked #4 in the list. Lilypichu is also known for her creativity and versatility. She is also interested in music, drawing and cosplay. Lilypichu reached at the peak viewership of 88908 in Q3 of 2020. 39daph is the leading streamer of “Art” category. Daphne often draws gaming fan arts on her streams, and she’s a top-3 host of this category among all people on the platform.

She also broadcasts different games, among which Skyrim is her top 2 category. 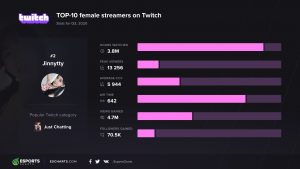 One of the most popular streamers of Just Chatting, Jinnytty is a Korean streamer but communicates in English giving her a large amount of fans base on Twitch. Her Hours Watched growth since 2019 concluded 341%. A significant part of her audience doesn’t stay at the broadcasts – 32% of viewers leave the channel after 5 minutes of watching. 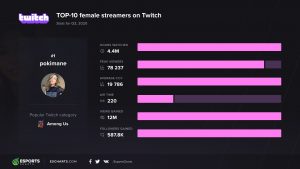 The list of most famous female streamer for Q3 in 2020 is topped by Imane “Pokimane” Anys. She is the most famous streamer in Among us category by 2M watch hours. Compared to Q3 of 2019, Imane managed to climb two positions up, and her Hours Watched grew by 70%. We’ve analyzed Pokimane’s audience intersection with other streamers, and almost 40% of viewers that watch other channels also follow Imane’s streams.

34% of viewers watch Pokimane in the range of up to five minutes and then switch to other channels, but she has the highest percentage of the audience, which stays on the stream up to 15 minutes – 24%. League of Legends eases the mission requirements for Lunar Revel 2022