The 2022 year is ending, but we, as Esports fans, have had a handful of unique tournaments throughout the year. Tournaments such as The International 2022, LoL Worlds 2022, and PGL Major Antwerp happened this year, where incredible storylines and intense matches could be enjoyed by millions of Esports fans around the world. These awesome tournaments have given Esports fans hope that the following year, 2023, will not disappoint. In this article, we’ll showcase five Esports tournaments to look forward to in the next year!

Valve, the creators of Counter-Strike: Global Offensive, has decided to host two Major tournaments yearly. In 2022, we had the PGL Major in Antwerp and the IEM Major in Rio, where both tournaments broke viewership records and were massive successes on betting sites that offer Esports betting.

CS:GO Major events never fail to garner millions of concurrent viewers, and Valve plans on bringing the next CS:GO Major to Paris. The unique thing about this particular Major is that BLAST will act as the tournament organizer. BLAST has never officially worked with Valve to host a Major, but has hosted multiple standalone tournaments without Valve’s collaboration. However, CS:GO fans consider BLAST the best tournament organizers out there, as they have hosted incredible tournaments without Valve’s help. Millions of CS:GO fans are looking forward to this collaboration between BLAST and Valve, and Paris is the perfect spot to host the Major!

League of Legends is undoubtedly the most popular MOBA Esports game when it comes to the viewership the game receives.

The LoL Worlds 2022 recently ended on the 6th of November, where DRX was crowned as world champions when they defeated T1 in the Grand Finals with a tight score of 3-2. Fans were overjoyed and satisfied by the intensity of the Best of 5 series, and the tournament was overall a massive success.

Although the event’s location is still unknown, you can expect the venue to ultimately sell out as millions of League of Legends fans in every part of the globe.

Though Valorant is popular throughout every region worldwide, the game is viral in the South Korean region. That said, South Korean fans can rejoice as Riot Games have decided to host a VCT Masters tournament in Seoul, South Korea.

Having the event in Seoul also means that this will be the first offline VCT event held in the Asian region. You can expect the crowd to go insane when Korean teams such as DRX start playing on the stage, and the best esports betting websites will favor the team backed by the home crowd. However, there should not be a heavy bias as Korean fans are genuinely passionate about the game and will make noise for any participating team!

League of Legends, also developed by Riot Games, has successfully held large-scale events in Korea, so we expect to see a tremendous Valorant tournament in Seoul!

Next, we have a Mobile Esports tournament, the Mobile Legends M4 World Championship 2023. Mobile gaming has rapidly increased in popularity throughout the year, and we finally have what is considered “The Largest Esports Tournament of Mobile Legends.” 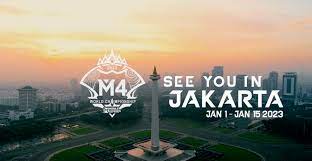 To top it all off, the venue will be in Jakarta, Indonesia. Indonesia has one of the largest mobile gaming populations in the world, and everyone here knows what Mobile Legends is. We can expect thousands of passionate fans to watch this event in person and hundreds of thousands of fans to watch from home. You can expect to see these tournament matches appear on Esports betting sites.

The event will last half a month and start on January 1st of 2023, so we will start the year with this massive Esport event!

In 2022, Tundra Esports emerged victorious and won over $8,500,000 in prize winnings. Though this is an astronomical amount, this first-place prize is standard, as The International will usually have prize pools of above $20,000,000. The International is always an annual celebration for the Dota 2 community. People who don’t even play the game tend to tune in to watch important matches, as the stakes get increasingly higher as the tournament progresses.

In conclusion, the 2022 calendar year has been a massive success in the Esports industry. We’ve had fantastic tournaments and storylines for all Esports fans to enjoy. But all that joy doesn’t end here, as we can expect to see even more incredible Esports events in the coming year!