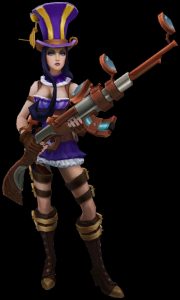 From all the runes available, Caitlyn needs those that make can make her more mobile or deal extra damage to the enemy champions. Here is a set that will be mostly used by professionals.

Every few basic attacks, or against a target she has trapped or netted, Caitlyn will fire a headshot dealing bonus damage that scales with her critical strike chance. On trapped or netted targets, Caitlyn’s Headshot attack range is doubled.

Caitlyn revs up her rifle for 1 second to unleash a penetrating shot that deals physical damage (it deals less damage to subsequent targets).

Caitlyn fires a heavy net to slow her target. The recoil knocks Caitlyn back.

ACE IN THE HOLE

Caitlyn takes time to line up the perfect shot, dealing massive damage to a single target at a huge range. Enemy champions can intercept the bullet for their ally.

Infinity Edge – Caitlyn gets +55 damage and 25% critical rate while the passive Infinity increases critical strike to 230% rather than 200%. This helps to increase her Headshot passive damage. Wild Rift Caitlyn Guide

Statikk Shiv – Caitlyn gets a +25% critical rate and +35% attack speed. The Electric passive increases her movement speed while the Energized passive stacks up as Caitlyn moves around and damages enemies and deals 50-120 bonus magic damage on reaching max stacks. Upon energized, the Shiv Lightning passive allows Caitlyn’s energized attack to bounce on 5 enemies.

Guardian Angel – This is the last and most expensive item in Caitlyn’s build. It provides her with +40 attack damage and +40 armor. The Resurrect passive provides her with a second opportunity to come back into the game.

Apart from the first three damaging items, the rest can be changed to meet the requirements of the game.

Free Fire Asia Championship 2021: Everything You need to Know about the event