Forza Horizon 5, Playground Games is the latest open-world racing game, was released last week for premium customers and will be available to everyone else this week. You will also get to know the System Requirements for Forza Horizon 5.

Forza Horizon 5, Playground Games is the latest open-world racing game, was released last week for premium customers and will be available to everyone else this week. The open-world arcade-sim racing game is now based on the map in Mexico, marking the first time in 9 years that the game has returned to North America since its inception in Colorado. Mexico is the largest map that Playground Games and Turn 10 have produced for any Forza Horizon franchise to date, according to Playground Games and Turn 10. The game is playable on Xbox Series S, X, One, and Windows 10, 11, among other platforms. You can watch Froza Horizon 5 Trailer here.

The game features rich graphics and well-known automobiles. In the fifth installment of the Forza Horizon series, players will stay on the right side of the road. The game was previously set in the United Kingdom and Australia, and players were required to drive on the left side of the road. Along with the new games, gamers will be able to enjoy Horizon Arcade, which features 12 minigames for them to enjoy.

Forza Horizon 5 also has a brand-new weather system, allowing players to experience a variety of temperatures around the country. You’ll also be introduced to the Horizon Arcade, which features a variety of mini-multiplayer games scattered over the landscape. 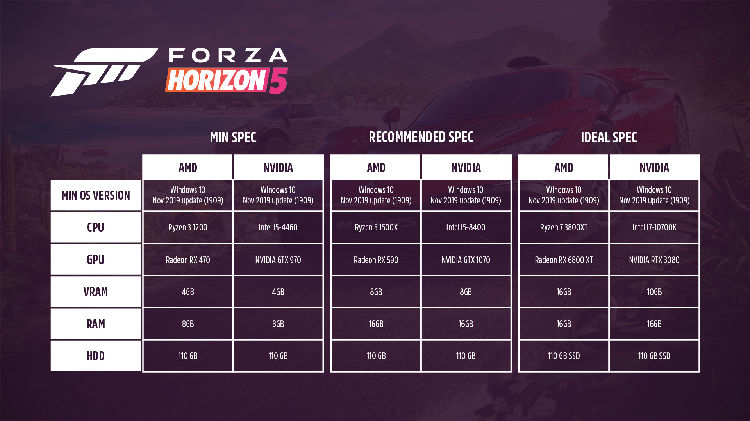 In terms of graphic requirements, it is a tough game. The game requires an AMD Ryzen 3 1200 series processor or an Intel Core i5-4460 processor as a minimum. The game will also require an AMD Radeon RX470 or an Nvidia GTX 970 graphics card in addition to these processors. For both CPUs, 8GB of RAM is required, as well as 4GB of VRAM (graphics card memory).