Fortnite Chapter 3 Season 2 Resistance is here: check out the battle pass, features, and more- Earlier today, Epic Games releases the brand new update of the game. The update comes up with the new season of the battle pass. The update also brings amazing collaboration and skins to the game. Check here full details of the Fortnite Chapter 3 Season 2 Resistance.

The war has evolved, and there are new ways to fight:

SPRINTING: Run at the new default movement speed, which is faster. A quicker default movement speed also translates into a faster sprint! This sprint is so rapid that you’ll have to put whatever you’re holding in your pocket. Because sprinting at a high speed can’t be sustained indefinitely, a new sprint metre will inform you how much longer you can go at that speed.

MANTLING: Gaining the upper hand in a conflict has always been crucial to victory. And, thankfully, where your feet fail, your hands can now assist you. Your hands can come into play and pull you up if a surface is just a little too high for your jump — or a platform is just a bit too distant for your landing!

SHOULDER BASHING: When it comes to sprinting, try slamming doors open with your shoulder. It’s probably not the most courteous thing to do, but at the very least you look great doing it. You can now also unlock doors by sliding into them!

BARS TO TURN THE TIDE

Bar funding is back! You’ll have more opportunities to command the Resistance as the Season progresses. Contribute Bars to pro-Resistance gadgets and vote on which objects to unvault using Bars.

TURRET DETERMINATION: Right now, a different kind of vote is taking place. It’s a Turret gadget vote instead of an item in vault vote! Various pro-Resistance sites require assistance in determining whether to install a Light or Heavy Turret. Get the classic Mounted Turret experience with the former. Do massive damage to cars with the slower but beefier latter. Sanctuary is the first site in need of assistance!

ARMORED BATTLE BUS: Another opportunity to donate right away with Bars is to finance the Armored Battle Bus. The Armored War Bus is a battle bus that is prepared to fight. Chonkers tyres, a Cow Catcher for increased ramming strength, and a Light and Heavy Turret are just a few of the features of this imposing metallic monster.

This car, though, isn’t all business. When you switch on the radio, it instantly transforms into a party bus! Find an Armored Battle Bus in Resistance-controlled POIs if you’ve reached 100% funding.

You presently have a large arsenal of weaponry to choose from. Here’s what you can do with it!

Combat SMG: The Combat SMG, like the Combat Assault Rifle and Combat Pistol, is a powerful weapon. To get the most out of its incredible power, learn to control its recoil. 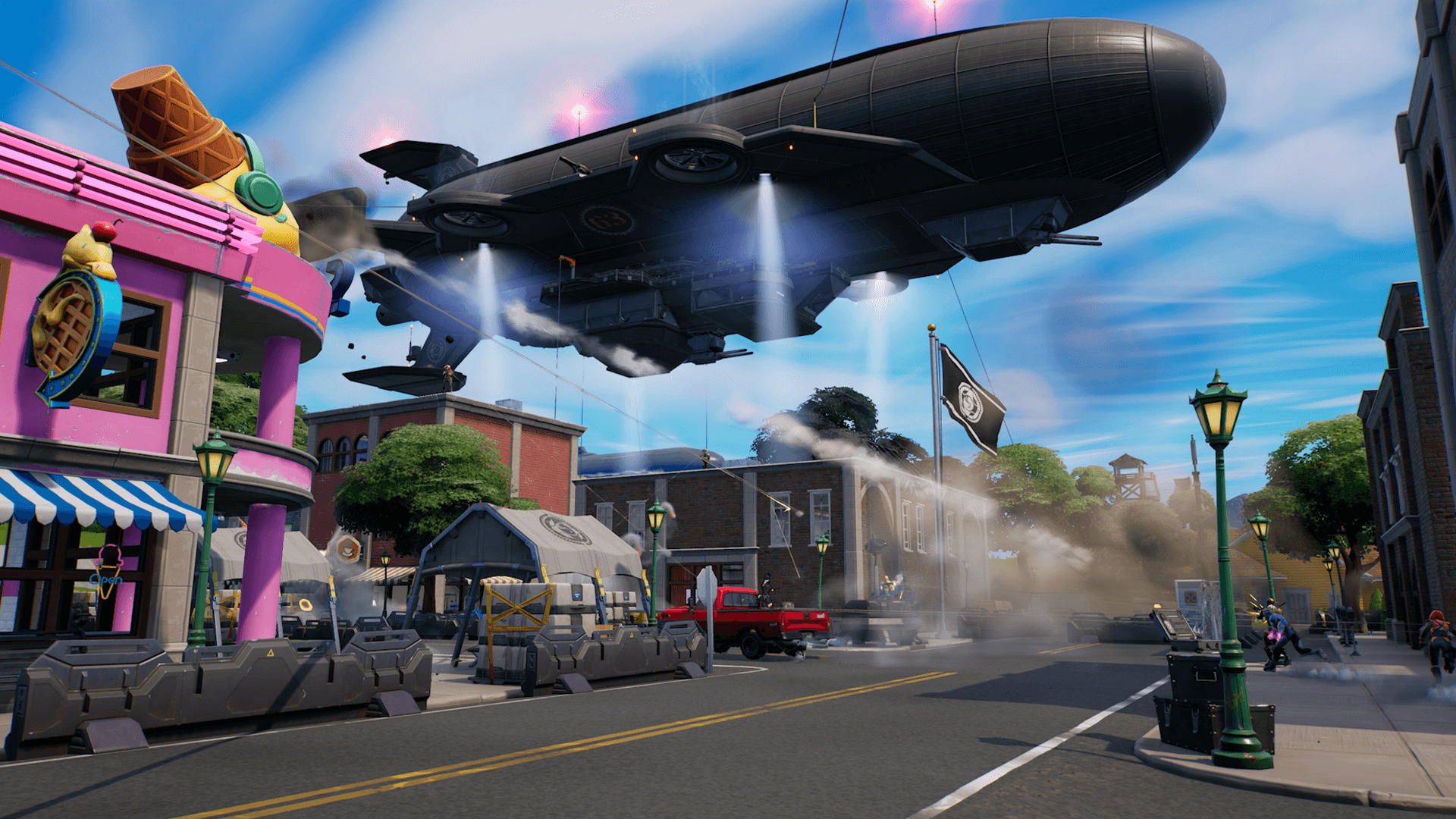 Although the IO’s blimps have a bird’s-eye perspective of the island, you may still visit them from the ground. Zip up to an IO Blimp and claim its loot! IO Blimps are attached to the ground via Ziplines, so zip up to one and claim its loot! What’s the best way to get back down? Use a Zipline, a fan’s draught to begin gliding, or a Siege Cannon to launch yourself.

Use the IO’s artillery against them:

IO TITAN TANKS: What’s one approach to get through stumbling blocks? An IO Titan Tank, to be precise! A Titan, on the other hand, is capable of more than just strong-arming. While driving, fire the Titan’s cannon, and if you want to be even more intimidating, have a partner manage its machine gun turret.

IO Titan Tanks have a lot of health, but if they take enough damage, their treads can be destroyed. Repair them by hand or using a Repair Torch if this happens! What to do if you’re up against a Titan, a formidable battle-tested machine? Damage the engine (placed in the back) enough to momentarily overheat its systems. This is a fantastic time to tackle the treads!

SIEGE CANNONS: Need to get somewhere quickly but the path is too dangerous to walk? Put yourself in the seat of a Siege Cannon and charge ahead. (Alternatively, you can launch your colleagues first, then yourself.) You’ll be offered the choice to deploy your Glider while in mid-air, but you won’t suffer any fall damage if you don’t.

Even if you don’t have any vacation plans, a cannon may be a lot of fun. Keep your opponents at bay by launching missiles in addition to using them as a mode of transportation!

HAVE A COWCATCHER: Chonkers Off-Road Tires have been utilized to make cars offroad since Chapter 2 Season 6, but the struggle against the IO necessitates even more changes. Put a Cow Catcher on your Joyride vehicle right now to increase its ramming strength! (Beware of barricades and other vehicles.) For the ultimate trip, combine a Cow Catcher and Chonkers in the same vehicle.

THE REPAIR TORCH: A HEALING ITEM FOR YOUR VEHICLES!

Whether your Mudflap has been damaged by explosives, your Motorboat has spent too much time on land, or your Titan’s treads have been targeted, a Repair Torch can help! Repair Torches restore vehicle health, but what happens if they run out of fuel? Refuel them at a petrol station!

Later on, in the Season, you’ll be able to unlock world-class criminal Prowlers in the Battle Pass!

CROWNING ACHIEVEMENT: A new season brings new chances to show off your abilities! With Chapter 3 Season 2, the Crowned Victory Royales displayed in the Crowning Achievement Emote have been reset.

In competitive/Arena playlists, as well as Team Rumble and Creative Islands, the building is unaffected. Take on your opponents in the ultimate struggle for the Zero Point in Chapter 3 Season 2: Resistance now that you’ve been briefed on the tools and strategies at your disposal!

Read More– Fortnite revenues will be donated to humanitarian help in Ukraine, according to Epic Games