Elden Ring is one of the most eagerly anticipated games in recent history, and with good reason. Not only is the game developed by esteemed studio FromSoftware, but it’s also a collaborative production from game director Hidetaka Miyazaki and legendary fantasy fiction writer George R. R. Martin. It is set to be released in India in early 2022.

Developer Has a Solid Reputation for Adapting Writers’ Works

One of the main reasons why gamers are so excited about Elden Ring is because they are aware of the great work that FromSoftware has done to date. The Japanese developer is best known for its Dark Souls and Bloodborne series, which were heavily inspired by another writer, H. P. Lovecraft. The mystery and dark environment of the American novelist’s works are clearly apparent in the games, which is an attractive style for fans of this genre.

Perhaps because of the popularity of the Bloodborne games, Lovecraft’s influence has spread into other areas of the gaming industry. There are numerous board games that have used his themes, such as Arkham Horror and Mansion of Madness. The writer’s unique imagery has even been apparent in other sectors of entertainment such as slots. One of the standout games in the genre can be found at Genesis Casino. A Dark Matter from Microgaming has an eerie Victorian mystery theme, and players who enjoy the Lovecraft tales will go wild for it.

FromSoftware decided to veer away from Lovecraft influences with Elden Ring and opted to collaborate with the current hottest writer on the planet. Martin is best known for penning the A Song of Ice and Fire series, upon which HBO’s Game of Thrones was based. The fantasy author has also been busy with some other projects for the American network and has recently been working on a new spinoff series, House of the Dragon.

Gamers are excited to get the opportunity to control characters in a rich and vivid fantasy world created by Martin. The game takes place in the Lands Between, and players are tasked with becoming the Elden Lord by collecting all the shattered pieces of the titular Elden Ring.

The action roleplaying game starts off in a linear fashion as players are introduced to the main premise, but it then becomes an open-world epic in which players are free to explore. The Lands Between features six main areas which are each controlled by demigods. These are the main bosses in the game. Players get around on horseback, but there is the option for fast travel later in the game. The good news for eSports fans is that there is a multiplayer mode that could enable players to compete within the fantasy land.

Elden Ring will be released in February next year for console and PC players and, judging by the award nominations it already has, it looks set to be one of the best offerings that FromSoftware has ever created. It’s time to start getting excited about what this rich fantasy world will have to offer. 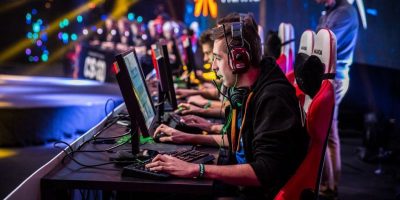