The final week of the Battlegrounds Mobile Pro Series (BMPS) Season 1 League has started today, with 24 teams competing for the next four days. There are a total of 6 matches that have been played today, with each team playing four matches. At the end of the day Team OR holds their first position in the overall standings by 491 points, followed by team Soul jumped from the third position to second by 392 points. Team XO drops to the third position in the overall standings by 382 points. BMPS League Week 3 Day 9

In Erangel Team Global eSports won the first match of the day contested between C and A by 10 frags, while team GOG came in second with 15 finishes. Team XO was able to secure third place with 4 finishes. GOGbullet Op was named MVP by 7 finishes.

In the second match of Miramar, played between group B and A, Team MG was able to secure the first position with 8 frags, followed by team Autobots and Team Nigma by 10 and 2 frags.BBXScream was named MVP by 5 frags.

Team OR won third match in Sanhok played between B and C, with 12 finishes. Team Soul secured the second position with 4 frags. followed by team Big brother eSports by 6 finishes for third place. ORAditya was named as MVP by 4 finishes.

In Erangel Team kinetic won the fourth match of the day contested between B and C by 14 frags, while Hyderabad hydras came in second with 11 finishes. Team Soul was able to secure third place with 5 finishes. 7seas Saranggg was named as MVP by 7 finishes.

Team EsportsWalaWSF with their tremendous gameplay won the fifth match of the day in Miramar played between groups C and A with 11 finishes, with 7 finishes team Enigma secured the second position. Followed by team Autobotz for third place by 7 finishes. ABZMRIGL was named MVP by 5 finishes.

In the sixth match of the day played between groups B and A, Team Enigma gaming was able to secure the first position with 14 finishes, followed by team GOG and Nigma galaxy by 9 and 5 frags. Enigma MAAVII was named MVP by 4 finishes. 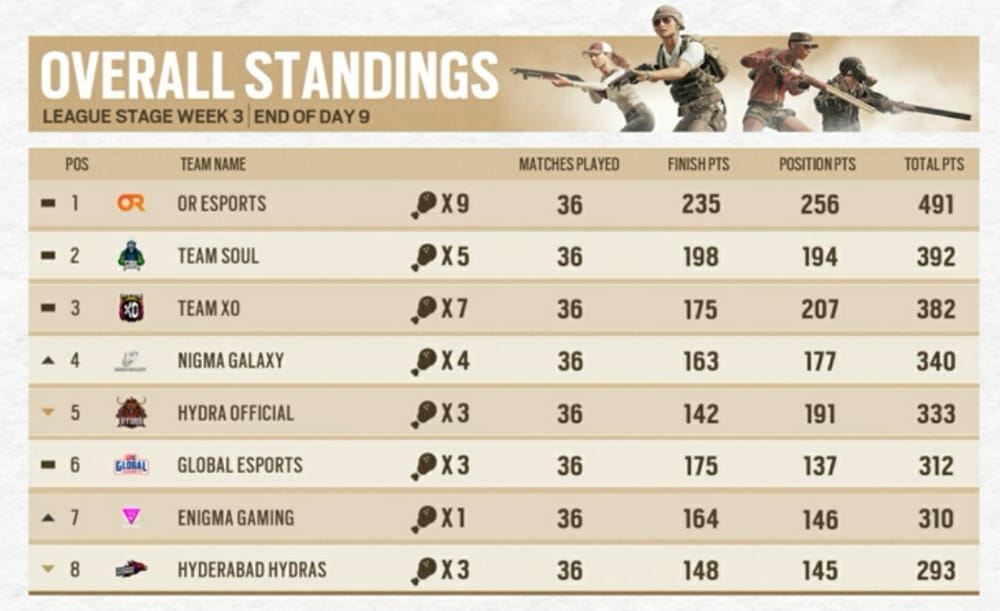