Apex Legends Mobile Cold Snap Patch Notes bring in new Legend, Game Mode, Battle Pass, and many more things – Since its release, Apex Legends Mobile has blown up among the mobile gaming community. The fast-paced action, unique map designs, and new legend characters have provided some much-needed freshness to the mobile FPS genre. While the game still has some bugs and problems, the dev team is working hard to solve these issues. They have now released new Cold Snap Patch Notes that bring in various new additions to the game. You can take a look at them below.

Loba had a tragic childhood as she saw her parents getting killed by hitman Revenant when she was just nine years old. Now she is grown up and has armed herself with the Jump Drive tech. With her new teleportation bracelet, she has now decided to join the Apex games to gain riches as well as take revenge.

Players can buy Loba from the in-game shop or when they reach Level 25 of the Battle Pass. While playing her, players can unlock her unique legend progression perks.

A new limited-time mode will be available in the game. It is called Armed and Dangerous: Shotguns and Snipers. Thus players can either engage in close combat with shotguns or long-range shooting with their sniper rifles.

Apart from this, World’s Edge will now also be covered with snow in the next in-game season titled Cold Snap. The Climatizer machine will turn off and on during the course of a match, blanketing parts of World’s Edge with snow. When the Climatizer is on, players can check their mini-map for Frosted loot boxes. A new throwable combat item called Snow Grenade will also be introduced with this new patch. It will damage and slow enemies caught inside its area of the explosion.

Players can collect diamonds from frosted loot boxes, eliminate enemies in matches, or by completing missions. These diamonds can be used to buy rare items in the Seasonal Shop. 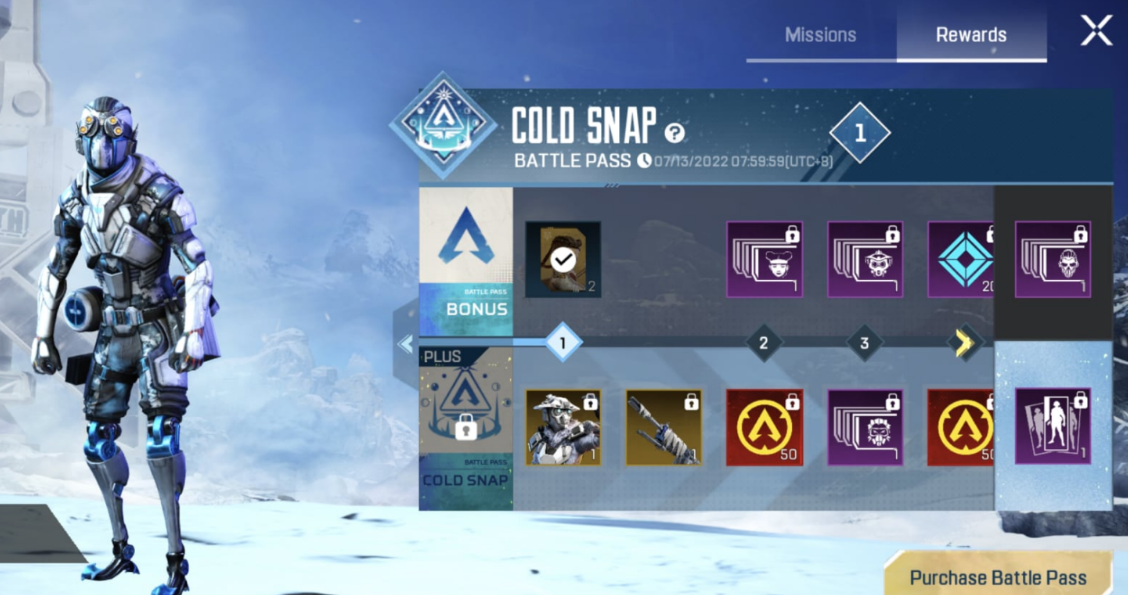 The Dev Team will be providing the following rewards to players who purchase Prime Time Premium or Premium Plus Battle Pass before the next season’s Cold Snap Battle Pass releases.

These rewards will be sent to the players through their in-game mailbox after the release of Cold Snap. From the start of the next season, players will also be awarded 800 Syndicate Gold when they complete the Cold Snap Premium or Premium Plus Battle Pass.

Stay tuned as we bring to you more news and updates from Apex Legends Mobile.

Garena Free Fire Max: Best 5 Ways to use the Shotguns like a pro